skip to main | skip to sidebar

Last July Annelise tagged me to post this on my blog. So yes, it is just a little late (9 months as the Nerd just reminded me) but I am actually doing one of these. Annelise, I hope this makes your day!

4 Movies I’d watch over and over:

4 (or more, so I could list them all) Places I have lived:

4 Of my favorite foods:

4 Places I’d rather be right now:

Spring break ended a few days ago and I think it's safe to say everyone is sad to be back in school being productive (or at least pretending). I went to Colorado for a few days to visit the folks and while it was great to see them, play with the dogs, get free food, and see the triple T family, it wasn't a thrilling high adventure trip (sorry guys). Since nothing really noteworthy happened in Colorado (except for Christian getting his hair buzzed (http://ridgwaywhitbys.blogspot.com/) I have decided to post pictures from my spring break last year which was a blast.

I somehow managed to get Michael to come to Moab with me instead of going on one of his usual extreme climbing trips. Even more amazing, I talked him into taking a few days to go to Telluride to visit my family as well (with promises of ice climbing and tasty homemade food).
We arrived in Moab late monday night and set up camp at the end of Potash road.

Tuesday morning we hiked up to Corona Arch for a bit of rappelling. We rappelled off twice to the amazement of a small crowd of hikers. They even took pictures of us. 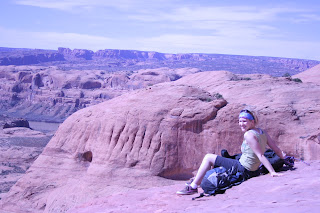 Chilling at the top of Corona Arch 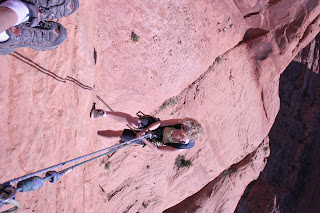 Getting ready to go over the edge 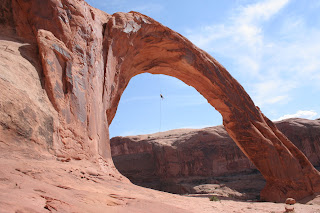 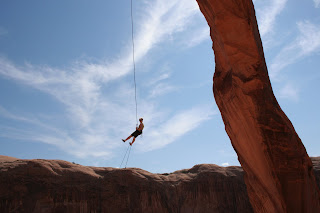 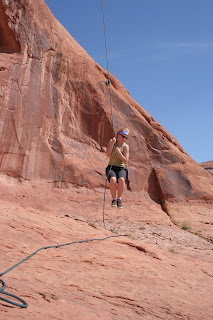 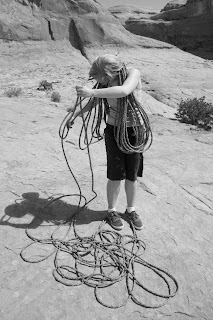 That afternoon we did a bit of climbing and I learned some important lessons about good foot placement.
Wednesday dawned nice and rainy which was a great invitation to sleep in and bum around the campsite until the sandstone dried. A bit more climbing was done and I made a nemesis from an unnamed 5.9. Most the of the climb was pretty easy but the beginning move was really hard if you're short. Grrrr! My big accomplishment was climbing Fist Full of Potash, an easy 5.10 that someone said might be too hard for me to climb. 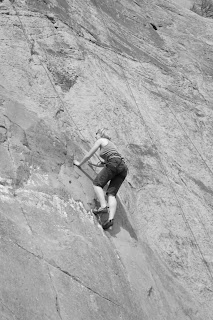 Later we went for a 35/40 mile ride which was fun but took a long time due to a few technical complications and a killer crosswind. The epic bike ride was rewarded with dinner in town at a place with all you can eat pizza and soup. The trick is to stuff yourself with lots of pizza and have the soup to fill in all the corners. 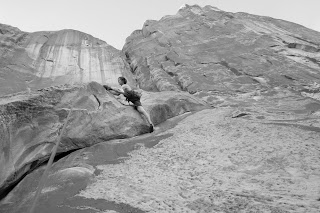 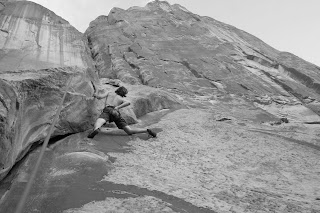 Waking up to the sound of honking geese is not nearly as nice as little birds, but sometimes it's the best you get. After a bit of climbing in the moring, we went and looked at dinosaur tracks and hiked at the Fisher Towers. 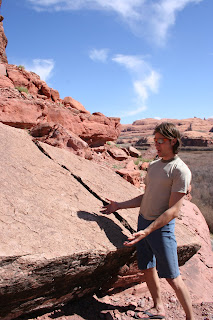 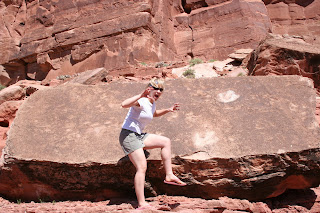 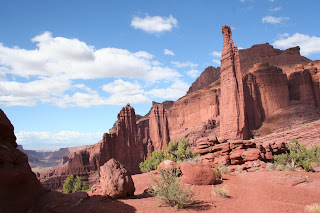 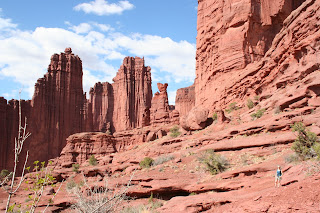 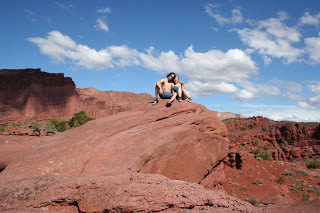 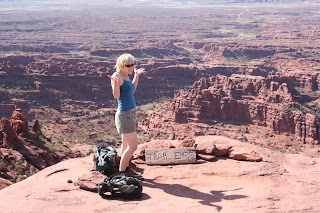 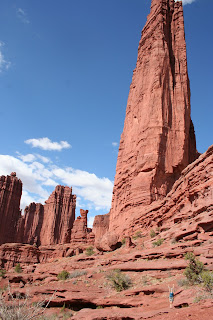 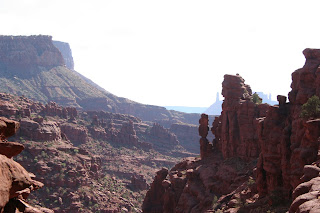 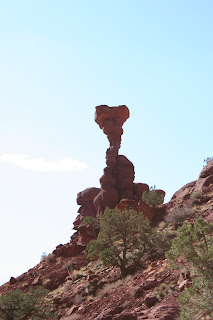 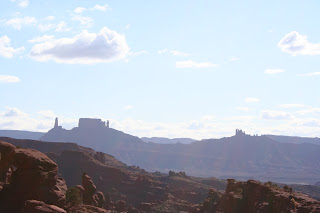 They are amazing. I can't even describe how beautiful it is out in the desert hiking to these huge towers. The pictures don't even come close to the actual experience. If I had to choose just one place to go before I died, this is where I would go.
The rest of the week was spent in Telluride, Colorado. It was too warm to ice climb and too cold to do anything else, so we watched a lot of movies, ate a lot of food, and slept in. 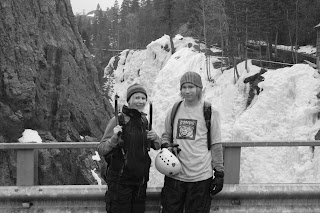 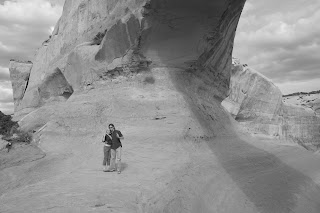 Too warm for ice climbing, but at least I got to hold the ice axes!


Michael and I made one last stop at Wilson Arch on the way home. All in all, it was a pretty awesome trip!
Posted by Caroline at 1:13 PM 1 comment:

I got my bike! I finally got my bike! It is soooooo awsome! By a very good stroke of luck the weather has been fantastic all weekend which meant I got to take my new bike out for a few rides. I can't even say how much I love the bike. The ride quality is so smooth, it climbs like a beast (a very fast, hill climbing beast), handles awesome, and has great acceleration. It's also orange. What more do I need to say? 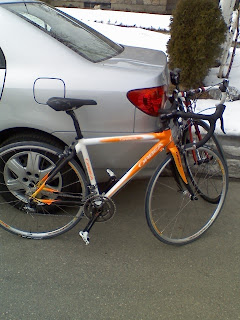 One of the baffling things about cycling is the whole style issue. Guys who get up in the morning and put absolutely NO thought into what they're wearing become obsessed with style. Everything has to match, and match the bike. I got talked into getting white pedals, orange sunglasses (they're actually really cool) and everyone keeps telling me I have to get rid of my hideous blue salad bowl helmet. I'm also not allowed to wear my awesome red jacket with my blue shorts (which do actually have red in them) and orange bike because it doesn't match, and my shoe covers aren't right either.
Well PAH I say! I ride my bike because love it and I'm gonna keep wearing my red jacket. And that's what I have to say to all you silly people who don't like my jacket and shoes covers! 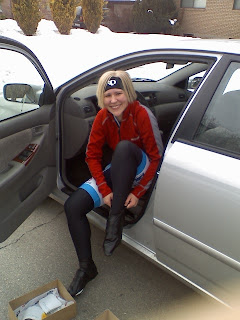 getting ready to go riding with Amber

(Special thanks to Amber for taking these pictures and posting them on her blog so I could steal them! Go see her blog here: amberlinb.blogspot.com ) 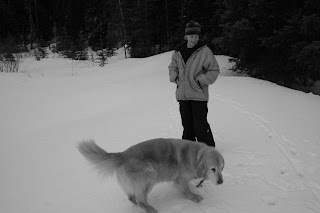 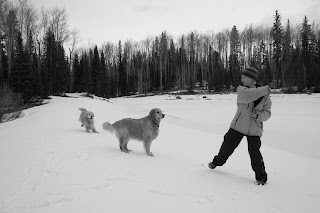 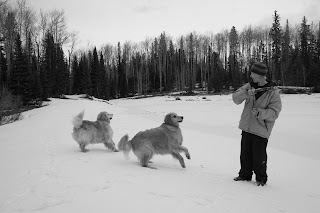 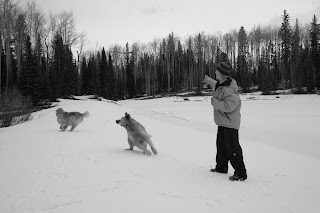 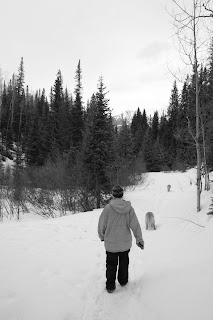 So last sunday my dog Skooter passed away. He was an awesome dog.
When I was thirteen mom and dad made the announcement that we were moving. Again. I had already said I wouldn't move unless we got another dog. They agreed to let me have a dog but said we'd have to wait until after moved. A few weeks later I came home from school and mom started scolding me the second I came up the driveway about my messy room and unmade bed. Sulkily I went upstairs to make my bed and amidst the pile of messed up sheets and blankets was a cute fluffy puppy! That evening we decided on Skooter's name via democratic process: we all submitted our name suggestions and dad picked the one he liked (funnily enough it was the name he suggested....)
Here are all the things that made Skooter so special (or "special" as some people liked to say):
Splashing in the water bowl until all the water was on the floor
pulling on his tail so hard he'd flip himself over
not eating his food unless I sat next to him
crawling into my lap to fall asleep
putting his paws on my chest pushing me over to lie on my stomach when he was too big to fit in my lap
sliding down the stairs instead of walking
pulling Kodi's tail to get him to play
diving into the river to dig up rocks the size of his head
He ate about six of mom's butterfly bushes, her really pretty rose bush, bugs, a stick of butter, shoes, cucumbers that grew through the garden fence, and many many other things. He chased the birds away for us when we came home, wouldn't come inside unless he had something in his mouth, and would make weird whining/growling noises when he was excited. He ran in his sleep (rather violently), shuffled his feet when he walked, pranced when he ran (someone at the dog park asked about that one time and dad told the man it was because Skooter was gay), and liked to push up against your feet.
Yeah he was a little slow and did a lot of dumb things, but that was what was so endearing about him. I'll never forget his droopy lips, excessive drool, and his sweet trusting temperament. He was my baby and I'll never forget him.

I just looked at the site and I realized that the title of my post from just a few minutes ago is listed right above the title of my previous post. THEY ARE TWO SEPARATE POSTS! My sister is beautiful and NOT fat!
Posted by Caroline at 1:14 AM No comments:

I'm glad my sister is pretty!

I have the CUTEST nephew in the world! Not only was I able to keep him from crying when I babysat a few weeks ago (for a little bit anyway, I guess I'm just not that same as mom...especially when she forgets to tell me what to do in case he wakes up...) but Annelise posts a million pictures of him and he just seems to be getting cuter every day! (The same can be said about my niece, but Thomas and Tori need to post more pictures!). Here's her blog site www.annelise.briggsfam.com
And she was afraid she was going to have an ugly baby!
Posted by Caroline at 1:09 AM 1 comment:

Caroline
I spend my time going to school and working, but try to find as much time to dance, ride my bike, climb, and spend time with my awesome friends. I'm terrible about writing a journal and keeping in contact with friends so I figured this might help keep myself and anyone who might be interested updated on my life!